With Nintendo gearing up for the Western launch of its revised DSi handheld - 3rd April Europe, 5th April US - the company's marketing materials are now flowing. For example, this week's copy of weekly trade magazine MCV came with a wraparound cover that pinned down some of the new features that will be available for DSi owners.

The first one highlighted was Take Pictures - after all, the DSi has two 0.3 megapixel cameras. In order to make the most out of them, the DSi comes with embedded editing software that will enable you to customise your photos with things like fake cartoon moustaches, flowers and lovehearts, as well as special effects such as reflections. 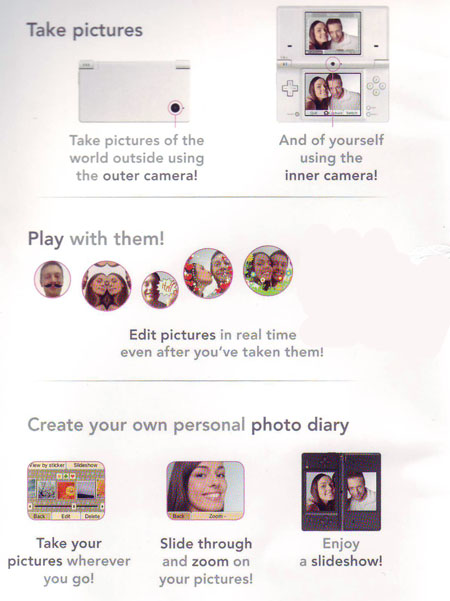 There'll also be a photo viewer in which you can set up slideshows of your favourites, and photos taken using the DSi can be synced to the Wii's Photo Channel. Neat.

Next up comes the audio side of DSi. You can use it as a recording device, thanks to the inbuilt microphone and the 256MB of memory, plus whatever else you add using the SD card slot. The software enabling this is called Nintendo DSi Sound. It also acts as a music player, although for some strange reason, it doesn't support the standard MP3 files, only the newer AAC format. (It is the default for the iPod though.) 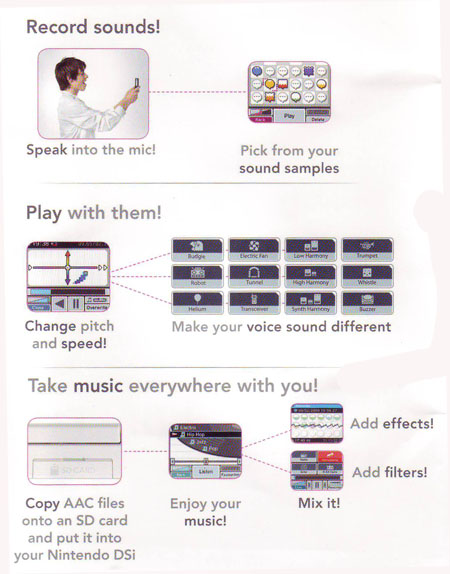 Using the Nintendo DSi Sound, you can mess around with the speed and pitch of your music and/or recordings too, plus you'll be able to use the preset effects and filters to make it sound really weird.

Of course, gaming is the main reason for owning a DSi, and thanks to the DSi's browser, you'll be able to head online to Nintendo's version of the App Store - called the DSi Shop - and download games, but you'll have to buy Nintendo Points with real money in order to do so. 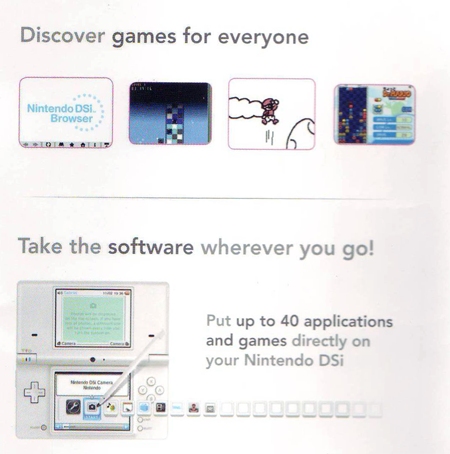 So it's all looking good for those Western launches. In fact, the only problem we have is Nintendo's sneaky little porky pie - as seen below.

Sure, it's not the biggest lie ever told in gaming history, but we reckon Nintendo could have added some small print to clear up the issue nevertheless.