There are two big golf games coming to iPhone in the near future: Tiger Woods 09 from EA Mobile, and Let's Golf from Gameloft. Earlier today, we got a sneak peek at both of them.

Specifically, we popped into the Apple Store on London's Regent Street to meet Eric Jue, senior product manager in Apple's iPhone worldwide product marketing division. He showed us a bunch of new games, and talked App Store - more of which later.

But among the games were the two golf titles, giving us a chance to directly compare them - and particularly their controls, which work quite differently. 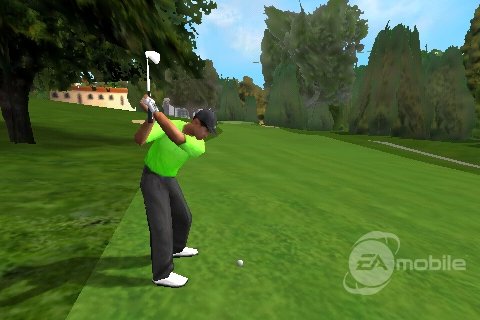 The game offers an iPhone take on the analogue swing control mechanic from those other games.

You tap your finger on a round button at the bottom of the screen, then draw it back (i.e. down the screen) to set the power against a scale. Then you swipe your finger forward again - straight for a straight shot, or a bit left or right to hook or slice.

Jue told us the game is due out in spring or summer. Although not quite finished, it looked pretty impressive - while the commentary is set to be a big feature, giving you constant feedback on how well (or not) you're doing. 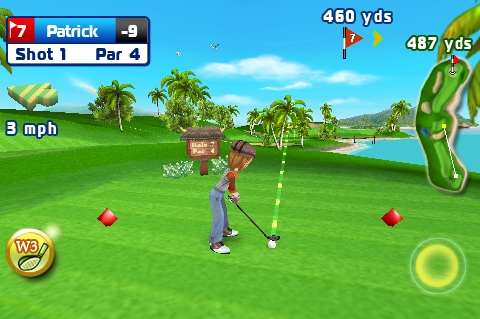 So how about Let's Golf? The game is more of an Everybody's Golf style cartoon game in looks - although that's not to suggest it's not packing some decent ball and environment physics.

However, the controls are much more traditional. You tap on the button at the bottom right to bring up a swingometer, tap again to stop it at whatever power you want, and then tap a final time to set the shot's aim.

It's got Gameloft's characteristic iPhone presentation - a nifty 3D flyby before every hole for example.

It's far too early to tell which game will be better of the two - or indeed which control mechanism will work best. You could argue that Tiger Woods 09's is more true to the iPhone's touchscreen interface, but equally that Let's Golf's may offer more control.

However, one conclusion is that both games are shaping up marvellously. Naturally, we'll have full reviews of both as soon as they hit the App Store.

The full list of games Jue showed to us today (with links to our coverage) was: Sway, Tiger Woods 09 and Let's Golf, Peggle, WordFu, Alpine Racer, and Zen Bound (which we've previously reviewed).

Hands on with Sway for iPhone

Has the iPhone 5S been outed in a cheat sheet leaked by a Japanese telco?