iPhone social games: everything you need to know

And why you should be playing them now

Ever heard of social games? You might not know the term, but there's a good chance you've played them. Social games is how the industry describes the games people play on Facebook and other social networks.

Famous examples are Scrabulous, Pet Society, Mob Wars, (fluff)Friends, Texas HoldEm Poker, Who Has the Biggest Brain and Friends for Sale, but there are many more. During 2008, the best social games became hugely popular.

The key thing to understand about them is that the actual game is only half the story. The social part is equally important: you play these games against your real-life friends, and in fact the games mainly exist to stimulate the social interaction around them - chatting, challenging and bragging.

As a result, many people in the games industry took a while to get the appeal of social games - especially when they didn't really look like traditional 'games' at all. It's true that many of these games seem to have low production values, but it's become clear that graphics have very little to do with what makes these games addictive.

And now they're coming to iPhone and iPod touch.

Amid all the talk about Apple's devices taking on DS and PSP with accelerometer-powered 3D console-quality games, it's actually just as interesting that the big social games firms like SGN and Zynga are training their sights on iPhone too. 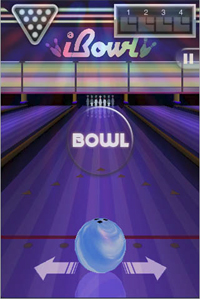 SGN announced today that its stable of iPhone games is close to racking up eight million downloads, with one - iBowl - notching up four million alone. The company just added an online multiplayer mode to that title, and has also launched an iPhone version of (fluff)Friends called i(fluff).

Meanwhile, Zynga has been focusing on the iPhone version of its Live Poker game, which is available in several different editions on the App Store, both free and premium. The company said this week that it thinks iPhone could be the biggest social gaming platform of all, ultimately.

Live Poker is interesting because it's the first iPhone game to use the Facebook Connect technology, allowing players to sign in with their Facebook logins and see which of their friends are playing. More games will use this - and the equivalent tech for MySpace - in 2009.

Social games are also fascinating because they're going to stretch the pricing model of iPhone games in a way that traditional games publishers haven't (so far) been able to.

By default, these games tend to be free: you can play all of SGN and Zynga's games for nothing on your iPhone. However, these companies are already exploring the idea of charging more for premium versions that give you a head-start in the games.

iMob Online, which we reported on earlier today, is another social iPhone game trying this model. Heavily inspired by Facebook's Mob Wars, it's a criminal strategy game that's free to play, or available in £0.59, £2.99, £5.99 or £11.99 versions if you want to start with a certain number of 'respect points' for your character.

These are early days for social gaming on the iPhone, and to an extent these companies are feeling their way to see what works and doesn't work on the platform.

Meanwhile, we're still waiting to see if Playfish - the third member of the 'big three' of social gaming alongside Zynga and SGN - brings any of its games to iPhone this year, as it hinted last time we talked to them.

Even so, the social iPhone games that have been released are providing valuable lessons for publishers focused on more traditional kinds of games, which could be ripe for a few social aspects.

Wouldn't it be great if Facebook Connect was incorporated into SimCity, Rolando or Asphalt 4: Elite Racing, so you could see which of your friends were playing and compare scores, for example?

By all means, get excited about the graphical and control capabilities of iPhone in 2009, but it's also worth keeping a close eye on social games - not least because many of them will be free to try out.

Death from above in Hellfire on iPhone