The 5 essential PSP games of Christmas 2008

No new games for PSP? No problem 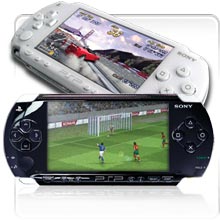 We won't pretend the situation facing the PSP isn't serious. There's a very noticeable lack of titles and seemingly little on the horizon - at least on the part of third-party publishers.

What does that mean for the future? Who cares. You either live in the present or you don't live at all. Or so we're told.

So let's focus on the scenario that you're likely to find yourself with a PSP this Christmas and because you're either new to the club (in which case, welcome) or you've taken your eye off the Sony handheld scene recently (that iPhone/iPod touch is just too damn sexy, right?) you're not too sure what you should be playing in between the Queen's Speech and the inevitable alcohol-fuelled family arguments.

Well, how about any of these five fine fellows? You'll note not all are the latest - a deliberate move - but they are some of the greatest. And if your PSP has been feeling a little neglected in recent months, it's more than likely one or two may have passed you by. So check those out - you'll find there's plenty of life in the PlayStation Portable yet.

The 5 essential PSP games of Christmas 2008

The 5 essential DS games of Christmas 2008

Top 5 most anticipated PSP games for 2011

The 5 most anticipated PSP games of 2009