As Nokia prepares to take N-Gage into 2009, one of the most intriguing games on its roadmap is Yamake.

Mainly because few people know much about what it actually is, other than a vague idea that it's to do with user-generated content.

We had a hands-on with a very early version, but since then it's been a mystery, apart from a quirky short film released this month, which didn't really explain the game itself.

So, we got producer Samuli Huuhtanen and games product marketing manager Timo Toivanen on the line to find out more.

"The basic description is Play, Make, Share," says Huuhtanen. "Yamake is about playing mini-games made by others and downloaded from the community, and making them yourself to share. And the raw material for those games is what you have you your phone: images, videos, texts and sounds."

That makes more sense. Nokia has been working on the Yamake concept for four years now, and there's a little way to go, given that the game's release date hasn't been tied down to anything more specific than 'first half of 2009'.

So what are those mini-games? There are three different types. Quizzes can be based on text or images, where you set the questions and then choose modes like time attack (how many answers can a player get right in a set time limit) or a 'keep going till you get one wrong' mode.

The second category is puzzles, where you turn images or videos into jigsaws, sliding puzzles and so on (each category has four different game options within it). Finally, the third category is amusements, which includes a Top Trumps-style card game.

How does the sharing work? "You can upload all of the games you have made to N-Gage Arena, where they are available for other people to play and then rate," says Huuhtanen. "And of course, you can browse through the games yourself, and download the best ones and rate those."

But you'll also be able to share your created mini-games with friends who don't have an N-Gage handset. Although there is a restriction: "You can share the games you have made with anyone with a Nokia Series 60 3rd Edition device," he says.

"You send the puzzles to them, and they can download a Yamake player, which lets them play those games, although not create."

Another upside to being able to send your created mini-games directly to people is that they're not published on N-Gage Arena in this situation. Great if, for example, you're turning a photo of your baby into a puzzle, but don't want strangers playing with it.

On the N-Gage Arena side, surely Nokia is concerned about people making games with objectionable (or, indeed, copyrighted) content? There are existing examples of UGC games being, ahem, corrupted by naughty players.

"Yes, we have seen what happened with the Spore editor on YouTube," laughs Toivanen, referring to the legion of giant penis monsters that popped up (so to speak) as soon as EA let people play with the Spore Creature Editor earlier this year.

"We have to be prepared for that kind of content. But of course we have active moderators in the N-Gage Arena community, and we will allow players to flag questionable content, which we can then remove after checking what the problem is. We will be following and monitoring the community really closely."

And there'll be teeth behind that moderation, too – Nokia will be able to ban persistent abusers of the system.

Naturally, Huuhtanen is hoping that Yamake players will take a more positive and creative approach to the tools provided by the game. "We'll be having competitions where we give out a topic and get people to create mini-games based on it," he says.

"People are competitive by nature, so we're expecting to get a lot of good puzzles out of that. I think we'll see some famous Yamake artists in the N-Gage community. People will start to learn who is making the really good puzzles, and whenever they do something, people will automatically download them." 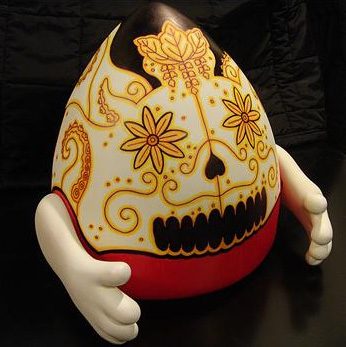 Talking of artists, Nokia has already kicked off the viral marketing for Yamake with an exhibition in London's trendy Notting Hill, in which artists from around the world were invited to create their own mini-artworks, customising little vinyl figures of the main character from Yamake.

Figurines included some based on Barack Obama and The Beatles, along with a cabbage and a Mexican wrestler. As you do.

That's just the start of the Web 2.0 goodness, though. There's already a Yamake Art Project page on Facebook, to which you can sign up as a fan (there's also a full website devoted to the project).

But we'd heard rumours that Yamake's Facebook integration might go further – you might actually be able to play or even create Yamake mini-games on the web, somehow. Is there any truth in that?

"We are creating a tool for the web, but it's still under development, so we're not giving any details about it," says Huuhtanen. "We'll also have a Yamake game website that will launch when the game is released, which will link into the Yamake community, showing how many games are available and who has done the best games."

Hopefully this has given you a better idea of what Yamake is all about. We can't bring you screenshots yet, as Nokia isn't releasing them until early next year. Rest assured, we'll publish them here as soon as that happens.

Will N-Gage game Yamake be delayed?