One of the most interesting parts of the recent Nokia Games Summit was its Mobile Game Innovation Challenge award, which shone the spotlight on three exciting new game ideas.

The winner was Ghostwire, a suitably spooky augmented-reality game from Swedish developer A Different Game that involves viewing the real world through your mobile (via its camera) and hunting for ghosts.

Well, we say developer – the company's website describes it as a consulting business, while boss Tom Soderlund says it's more of a "cluster of mobile game veterans" working on new ideas.

Anyway, we wanted to find out more about Ghostwire, and what happens now it's won an award. So we asked Tom.

Pocket Gamer: Congratulations on the award - you must be pretty chuffed.

Tom Soderlund: It was overwhelming! We were so happy when we got nominated for the award, so we didn't really know what to expect.

But we did have high hopes for it. We really like the ghost theme ourselves, and looking at contemporary TV shows, there seems to be a lot of interest in ghosts in general.

Combined with the camera and connectivity aspects of the game, it's really a made-for-mobile kinda game. It wouldn't be easy to do this on any other platform.

For readers who weren't at the Summit, can you explain what the game's about and how it works?

We've actually been loosely designing the game and thinking about the concept for a couple of years, but it wasn't until the Nokia awards were announced that we actually started working on a concrete concept for it.

It was a big mix of ideas floating around, but the awards made it happen. We had a lot of ideas already though, about the gameplay and the camera features, so we didn't have to work on it for a long time to get the structure.

Ghostwire is a pretty basic game mechanic in the background. The core mechanics are that of a collection game, sort of like Pokemon, but combined with aspects from adventure games, and wrapped in a more abstract alternate reality presentation.

So, you interact with ghosts using the camera, have a dialogue with them, and try to solve their problems. It's combining a more old-fashioned puzzle game mechanic with a modern innovative presentation.

As you say, everyone loves ghosts – what were the key influences when coming up with the game's theme?

Well, we all had the ghost stories from our childhood, but I think definitely TV shows like Most Haunted, and movies like The Sixth Sense and The Others were also instrumental in shaping the theme.

Oh, and of course The Ring. There's been a renaissance for ghost movies in the last couple of years, defined by the Japanese movies that made ghosts more contemporary. They aren't just old haunted houses, but more ghosts existing in our contemporary world.

Talking to people about the game, it seems to strike a chord with people that extends far beyond the gamer crowd. People seem to really relate well to the idea of ghosts, and having the cellphone act as the bridge or medium with which you communicate with the spirit world also seems to make sense to people.

Does that put pressure on you to make sure the game's atmosphere lives up to its spooky promise?

It's definitely one of the hardest challenges in building the game – to really create this suspension of disbelief, and make people feel it could actually be real.

To write about it in a game concept is one thing, but actually realising it will be a big challenge. We're going to work a lot on the visualisations of the ghosts. It won't be too obvious, though – it'll be more about abstract shapes and mists and stuff like that.

Plus we're going to work a lot on the sound design, so hearing the ghosts will help you to find them.

How tough is it getting the game's camera features to work well?

Well, we're still not done with it! We're starting with a very basic implementation, then we'll make it more and more sophisticated, and see where we hit the ceiling.

So in the most basic implementation, we're using the phone as a pure motion-detection device. If you remember a game called Mosquitos a few years ago, it used a similar mechanic. You'd see mosquitos apparently flying around in the space around you, and if you turned around and back again, you'd see the same mosquito.

So that's the mechanic we're using in the most basic implementation, but we have done some prototyping on more complex shape recognition that enables us to place certain ghosts close to light sources, or even detect the shape of a TV monitor or LCD screen, so we could have ghosts appearing as if they're coming out of the monitor.

But it all boils down to what kind of robustness we can get with those features. We don't want players to be stuck in the game because the light conditions aren't optimum, for example.

What are you doing on the connected side of the game?

We're not seeing this as a multiplayer game, but there will be a community of ghost hunters helping each other, using some kind of online discussion boards or forums.

We want people to be sharing their thoughts on how to approach and find different ghosts. The idea with the game progression is that the first ghosts will be extremely easy to find, but as you go along they'll become more tricky.

So they might require combinations of what time of day it is – some ghosts might only appear at midnight – and other ambient parameters, like if it's dark or light around the player, or if it's silent or very noisy. We want to create a community around that, where people can share their information.

You got a €40,000 cheque from Nokia for the award, so what happens now? Is it offering a publishing deal for the game?

We're talking to Nokia and we'll see what happens. We're taking the money we won and starting pre-production on the game, making some gameplay prototypes and fleshing out the design.

Ghostwire is also nominated for the IMGA competition, which means we have to have a working demo by early next year, so we're going to do that. But it's going to take most of 2009 to produce the actual game, even if we have a working prototype in February.

I totally agree. Of the three that won a prize in the Nokia awards, none of them would have been picked up by the major publishers. In that sense, the awards really worked, because they brought forward some really innovative games.

What's your background in mobile games?

I've been working in the industry for nine years [Tom co-founded Swedish studio It's Alive, which made the pioneering location-based game Botfighters]. I started doing SMS games, then WAP, and then Java games.

There was really a lot of excitement around 2003 and 2004, when the first Java phones and colour screens started to become mainstream. But then it stalled a bit in 2006, when people started realising it was really hard to make money in the business.

Now we're getting some exciting new things in the market like the new N-Gage, and the iPhone and App Store. These kind of initiatives are really important for shaping this business.

There are two key things we need to make mobile games a bigger business. One is to have a more even development platform – four or five major platforms rather than hundreds of different handsets. And we need a distribution mechanism where a lot of revenues can flow to a game publisher or developer, like they do on the App Store.

Is it a good time to be an independent developer?

It's interesting, because these developments [App Store and N-Gage] are happening at the same time as games on other platforms are having a renaissance period with more independent games coming forward.

But on iPhone now, you can develop a game with a rather small budget, build up some interest and buzz on the internet with your own development blog, and have a pretty good launch and strong sales on the App Store. It was totally impossible a couple of years ago.

This may seem a rude question, given that Nokia just gave you a big cheque to put it into pre-production, but… Ghostwire for iPhone?

Weeelll… I would love to see Ghostwire coming on as many platforms as possible, but we'll see what kind of publishing deal we get. It would definitely work on more platforms, but we'll see.

What does it mean for A Different Game, in terms of your growth?

Well, we're basically a cluster of mobile game veterans who have worked together in different combinations in the last few years.

We're four people, and we don't really plan to become a really big mobile game production studio. Instead, we want to shape new game concepts and then bring people in on a project basis, or work with other game studios to create the games.

The internet economy has helped that – it's easy for us to work with developers in other parts of the world. I think we're going to see more of that in the industry.

Are you working on anything else?

We're working on one GPS game that's being launched in the US called Geo. It's like Risk set in the real world, so you divide the world into turfs and you battle to build as big an empire as possible.

It's for a location-based company called Useful Networks –we've been working with them for the past year on the game.

It's easy to design a location-based game that becomes very hardcore, and requires constant attention or running around on the streets. But the big challenge with Geo has been to develop something different.

Our thanks to Tom for his time. We'll obviously continue to keep an eye on Ghostwire and the moment we'll hear more, we'll whisper it your way. For now, check this video: 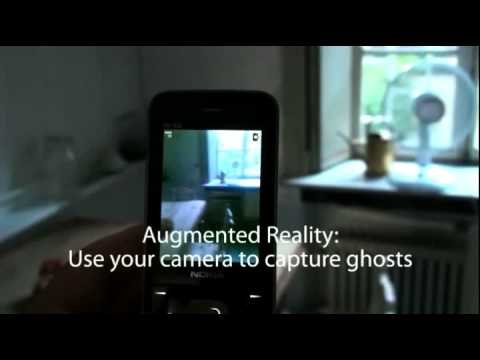 Want more? Check out our growing collection of Ghostwire: Link to the Paranormal articles!

Prinny: Can I Really be the Hero trailer debuts

Ghostwire sends shivers down our screens