And all of this BEFORE it got to the 3G iPhone

Apple showed off several iPhone games during Steve Jobs' keynote speech at WWDC today, as well as explaining that the iPhone App Store will go live in July.

Developers will be able to set their own prices for games, and will keep 70 per cent of the revenues.

You will be able to buy games from your iPhone itself. If a game is less than 10MB in file size, you'll be able to download it over the air to your iPhone. If it's larger, you'll have to get it via wi-fi or via iTunes on your PC.

(All of this applies to general applications too – not just games).

Several games developers were on-stage during Jobs' keynote showing off their titles. Sega revealed that iPhone Super Monkey Ball will have more than 100 levels, and showed how slick the tilt controls are using the final world of the game.

Pangea Software showed off two iPhone games during the keynote. Enigmo is a physics-based game with water droplets bouncing around, and it uses touchscreen controls. Here it is (pic from Engadget): 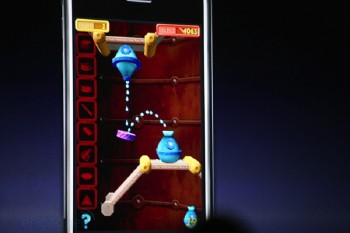 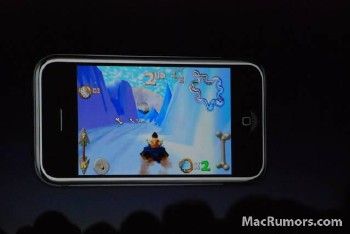 Again, both will be available for the App Store's launch for $9.99.

Finally, Digital Legends showed off a complex-looking 3D fantasy battler – a bit God of War, a bit Tomb Raider. What's more, they said it had only taken two weeks to code. Check it out (pic from Engadget): 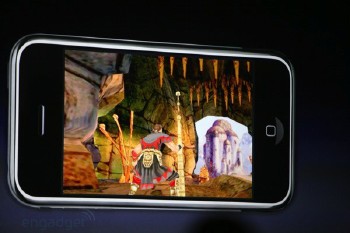 It's not due out until September though. And yes, that is the same Digital Legends who're making 3D beat 'em up ONE for N-Gage, if you were wondering.

That's all the games and app news, but of course, Apple also unveiled the 3G iPhone during the keynote. Click here for our separate story on that, and click here to check out Pocket Picks' specs comparison between the new and old iPhones.