After a rocking Christmas, it's time to start trading again

It's been a slow start to the year for the Nintendo Wi-Fi Connection, which was closed during the New Year period, only coming back online on Monday January 7th. Maybe that was why the total number of players connecting to the service this past Sunday dropped 8 per cent compared to the figures seen over the Christmas-New Year weekend.

More likely however, this drop off was due to the incredible number of people playing the Wii version of Guitar Hero III: Legends of Rock via NWC over Christmas. Now they've all gone back to their normal lives and put the wigs back into the cupboard - connections via the game were down by 23 per cent.

Still, Guitar Hero III remains the most popular connected game on Nintendo consoles, but the biggest performance increase came from the ever reliable Pokémons Diamond and Pearl, with connections up 51 per cent and 16 per cent respectively. Animal Crossing: Wild World (up 8 per cent) and Mario Kart DS (down 7 per cent) continued to maintain the strong performance of DS titles, at the number 4 and 5 spots on the chart. You can see some of the weekly activity from the graph below. 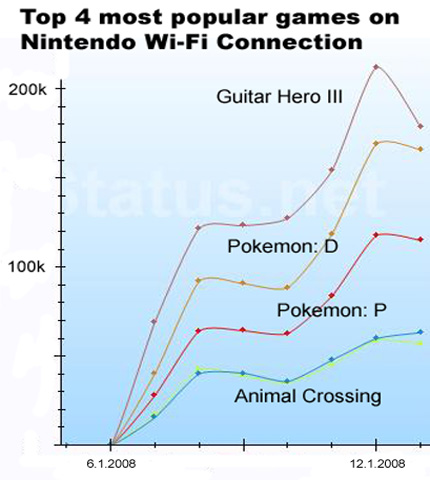 Other games seeing substantial improvements in their online popularity included Dragon Quest Monsters: Joker (up 110 per cent, presumably thanks to its US release), Rune Factory 2 (courtesy of its highly successful January launch in Japan), while on Wii, another new release, Sonic Riders; Zero Gravity entered that console's top 10.

It's also good to see the first few connections for Advance Wars: Days of Ruin (or Dark Conflict as we in Europe now have to call it) popping up - it will be the first game in the series to support online four-way multiplayer.