Christmas is the time to rock out, not to trade beasties

It's been a while since we last cast our eye over the most popular games on the Nintendo Wi-Fi Connection. The Christmas period certainly provided some interesting developments; not least as it marked the first time a Wii game hit the top spot.

Unsurprisingly, that game was the Slash-fronted Guitar Hero III: Legends of Rock, which hit a post-December 25th peak to overcome the previously long-running top NWC title, Pokémon Diamond. Indeed, in the festive family days inbetween Christmas and New Year, the game more than doubled its pre-Xmas traffic to peak at over 250,000 daily connections. 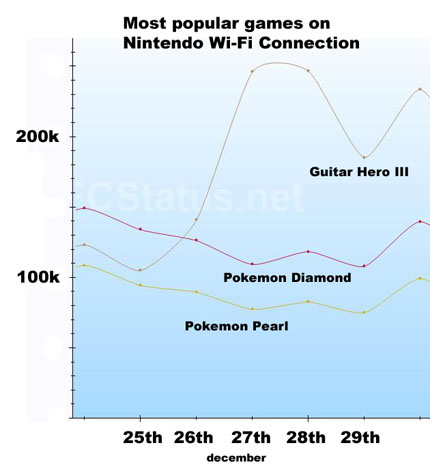 And Guitar Hero aside, it's also significant to note that Wii games are starting to fill up some of the lower chart positions when it comes to the most popular games using the global NWC multiplayer and communication service. In total, there are 32 Wii games using the NWC, compared to 130 for the DS.

When it comes to DS games however, the highest rated are exactly the same as when we last covered the technology, with Pokémon, Animal Crossing, Mario Kart and Metroid: Prime Hunters - plus new entry Zelda: Phantom Hourglass - featuring. Of course, with the exception of Activision's Guitar Hero III, all titles, whether DS or Wii, are published by Nintendo.