Hands On with PSP's Go!Cam

There are few pursuits seemingly more dubious to those on the outside than amateur photography. Even in these days of cameraphones and flickr, there can be something rather oily about a person who sits between the sociable point-and-clicking of friends, and the professional with his chunky SLR and flash combo. (Just consider the scantily-clad covers of those hobbyist photography magazines...)

But what's a man to do when he's handed the PSP's Go!Cam and told to get on with it?

Luckily, today provided at least one a good photo op for a man in Manchester with his PSP (although the brightness of the sun did make it almost impossible to see the PSP's screen, so the composition of this shot below was pretty lucky.) 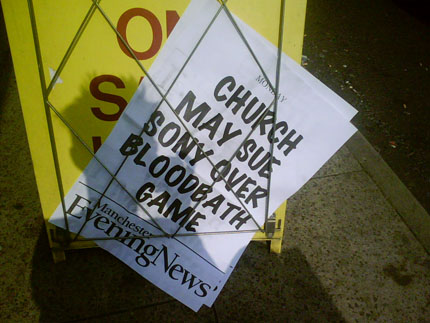 Actually, in this case this man is going to try and pretend he's a real pro and needs more time with the little lovely, so this is just a first impressions Hands On of the camera, before a review full of technical photographic jargon (assuming we've learned it all in time).

First things first. In terms of looks the Go!Cam is definitely on the point-and-click end of the camera experience. It's somewhat plasticky and cheap in feel, and at 1.3 megapixels would appear to be about the same general quality and resolution as a standard cameraphone. One neat thing extra however is the way you can rotate it 180 degrees, so the lens is either facing you or facing away from you.

Attaching it to the top of your PSP is a tricky job. There's a little screw on the lefthand side of the camera mounting, which fixes into one of the holes either side of the mini-USB port on top of the PSP. The other side is just a locator stud. To be honest, the connection with the USB port itself is tight enough, provided you're not going to be waving your camera around.

Screwing the camera into and out of the PSP is definitely a fiddly job, and you need patience, especially when you're trying to unscrew it. Once in place though, you simply switch on your PSP and under the Photo icon on the Crossbar you'll see the camera icon. Select this to get a live feed from the Go!Cam.

Other things you can tweak include image quality, four simple white balance settings, an exposure adjustment, and five Photoshop-type effects.

A more complete PSP editing package called Go!edit is available, too. You have to download it from YourPSP.com (using your PSP serial number to get access to the 80MB download), and be running at least firmware version 3.40. You'll also need to have your PSP connected to your PC during the process. There's plenty more options in Go!edit, which we will have investigated further in time for that full review.

As for taking photos with Go!Cam, perhaps it will help to compare this arty composition created with two different devices. The top one was taken with the Go!Cam, while the lower comparison shot is from a Nikon Coolpix L3 (a fairly decent 5.1 megapixel point-and-click camera). 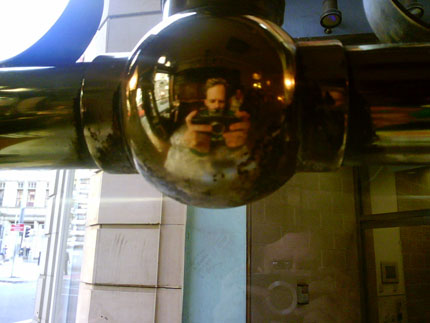 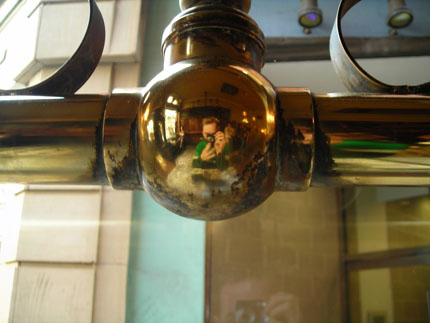 Some obvious differences include the relative darkness of the Go!Cam image in terms of the reflection on the brass ball, and that the image is bloomed out more by the daylight on the lefthand side. The colour in the Coolpix L3 is much more vivid, too (check out that lovely green sweater).

On the other hand, if you compare the prices – £35/€50 for Go!Cam, with around £150 when the Coolpix L3 was first launched – plus the difference in size between the units, in our first Hands On test the Go!Cam comes off pretty well, and much better than your average cameraphone (but at that price and with a PSP attached it should, shouldn't it?).

Add a camera to your PSP

The beautiful models are all wrong in Sony's Go!Cam footage