20 per cent jump in Nintendo Wi-Fi Connection use

Up to this point, the big games on Nintendo's global online Wi-Fi Connection service have been for DS. Slowly though, online games released for the Wii console are beginning to make their presence felt.

First it was Pokémon Battle Revolution. This Japanese-only game (due for US release on June 25th), enables you bring your pokémon from the Diamond and Pearl DS games onto the Wii. In our last chart, it was the ninth most popular game on the NWC.

More startling however, the European launch of Mario Strikers: Charged Football (it was out on May 25th, but with some apparently pre-launch sales also being logged) saw that title shoot into the charts at number three, only being trumped by Pokémons Diamond/Pearl. 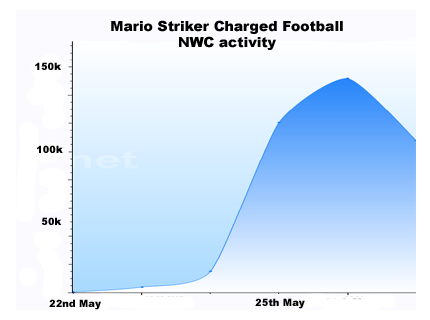 What's interesting is that taking Mario Strikers: Charged Football out of the equation, there's little change in the NWC activity numbers for DS games; its launch hasn't meant players who were previously playing on DS have dropped them to pick up their Wiis instead.

Indeed, the combination of the bank holiday weekend in the UK, and more significantly, the Memorial Day weekend in the US, saw the underlying usage of DS games on the Nintendo Wi-Fi Connection rise slightly, up around two per cent in terms of Saturday's playing peak.

The combination of the two effects was almost enough to break the one million sessions in one day barrier. 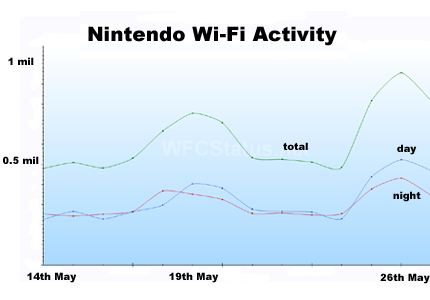 We flip out with the creator of Powershot Pinball Constructor