If consoles and PCs are the established elder siblings of the video game family, the mobile is the stumbling infant. Although growing at a prodigious rate, it's smaller than its brothers, spends a lot of time in retro hand-me-downs, and is unable to take more than a few steps forward without losing its balance and sitting back with a thud.

Naturally, too, it can barely talk. The money often just isn't there for foreign developers to pay for careful translations.

Take the marketing text for Mosquito, which babbles endearingly about an "augmented Reality Ego-Shooter … in which no-one can sit still!"

UFO Predator's blurb, meanwhile, strikes an awesome B-movie bum note when it invites you to "embark upon a path of carnage and turn giant creatures and advanced weapons into worthless rescue teams!" 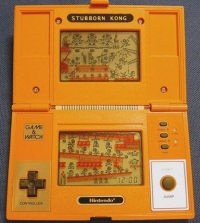 Of course, some mistranslations aspire to greatness. When Nintendo was trying to come up with a title for a legally precarious 'homage' to King Kong, it wisely opted to appease the god of copyright law by substituting at least one of the words 'King' and 'Kong' with a word of its own.

Reasoning that the giant ape it had produced never budged nor ceased rolling barrels down the scaffolds on which he was perched, Nintendo deemed that he was 'stubborn'. In a standard thesaurus, one of the synonyms of 'stubborn' is 'donkey'. Hence Donkey Kong.

'Stubborn Kong' wouldn't have quite the same ring, would it?

Lost (and found) in translation

Visits to the thesaurus by developers can result in pure nonsense. Take Aircraft Gear's introductory assertion that an aerial battle has turned the sky into a "rouge boundary" – a mind-bending expression that can only have come from such a linguistic consultation. Does it make you see red? Come on, kiss and make-up. 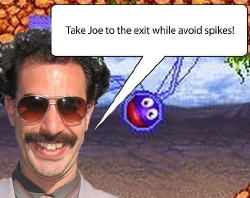 The best mistranslations, however, are the ones that actually improve the games in which they appear.

Moorhuhn, on the other hand, adds literary depth to its translated marketing text when it warns that the player may "Get no air and fly deep frozen through the darkness of space." A line that wouldn't be out of place in a volume of poetry.

One day the mobile games industry will reach maturity, translation will be taken more seriously, and these precious howlers will be a distant memory. So for now, let's salute them with some of our favourites.

Number 5. Fantasy Battle
"Who gave this live-walking demon a rebirth?"

Almost as amusing as the broken English here is the image the quote conjures up of an irate mother clutching a wooden spoon and surveying the damage caused by an unattended puppy, when in fact – the blurb goes on to say – a wizard "is eager to lead his evil troops to rule the World".

Which is much worse news.

Number 4. Giana Sisters
Giana Sisters has a curious history. Long ago banished from the shelves for its close resemblance to Mario, it has lived in a semi-legendary limbo since the early '90s, like a prehistoric woman frozen in a glacier wall.

Now that Giana Sisters has – thankfully – found her freedom on mobile, it's no surprise that she talks like this: "One night when being fast asleep Giana from Milano has a strange dream. All of a sudden she is located in a mysterious world where all things happen to be unordinary."

3. Magnetic Joe
"Take Joe to the exit while avoid spikes! While you are magnetised, the neighbour magnetic cells attract you!"

Two sentences, two exclamation marks. A fair hit-rate, sure, made even more impressive by the sheer mundanity of the sentiments they express. However, this opening pair pales in comparison with the third frantic sentence in the series, which even requires the added power of Random Capitalisation to make its force felt:

"Pause with the Right Softkey!"

2. Funkey Monkey
"Perform a superswing – probably the coolest move ever – and catapult yourself onto the highest treetops of the rainforest!"

The bananas? "Delicious". The hat? "Stylish". The soundtrack? "Ingenious".

What we like most about Funkey Monkey is the claim that superswing is the 'coolest move ever,' coupled with the conscientious qualifier 'probably.' Like a lad being quizzed about his kung-fu skills, it cleverly admits to only being 'probably' the best in the world, preserving the appearance of level-headedness as it brags enormously.

As for its claim to be "probably the craziest monkey-action of this year!", we're saying nothing. Utterly endearing stuff.

1. Death Trap
In the game author's words, Death Trap (pictured top) is "the best strategy that the survival horror games lovers have been hassling."

Though we can't quite corroborate (or fully comprehend) that statement, we can say with confidence that mistranslation is a huge attraction to this fairly passable game. To recount every howler verbatim would occupy acres of our site, yet nothing better conveys the sheer relentless hilarity than the text itself. We urge you look it up.

Never heard of Death Trap? What better way to learn more than to read its very own marketing text: "Death Trap is a horror action game that the terrifying graphics will make you enticed with surreal illusion."

It just doesn't get any better than that.

Glu to launch more Sega mobile games, but Sega Rally not on roster