The 10 worst DS games so far

When DS stands for doubly sh...ocking 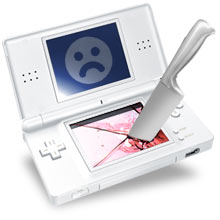 Last week we warned you off the worst 10 games so far released for PSP. In an ideal world, we could now relax and make a cup of tea.

Alas, the fight goes on. For all its special gems like New Super Mario Bros, Elite Beat Agents, and Harvest Moon, the DS has suffered from as many bad games as its Sony rival. Indeed, according to this unbiased evaluation of the PSP and DS game reviews on MetaCritic, DS has played host to even more dreadful, money-sucking, gameplay-less stinkers.

The reason? Probably the same things we love the DS for – its unique features, such as the dual-screens and the stylus. A lazy PlayStation 2 port might at least result in a mediocre game on PSP, but DS games done on the cheap are likely to be pure evil.

Most of the DS's best games were developed by Nintendo, which backs up this theory, and not one of our awful games were. Taking Nintendo's software designers away from the company's hardware is like making an omelette without eggs, of course, but it reinforces the point that focus is required to get the best from DS.

Without further ado, here are 10 of the worst games to grace our beautiful DS Lites. Don't give them the benefit of the doubt. Cast them out!

Is the Sony Ericsson W810i the most popular gaming mobile?