The pros don't have a monopoly on good ideas

After the buzz surrounding Valve's upcoming PC game Portal (which began life as an indie-released freeware title called Narbacular Drop, developed by students from the DigiPen Institute of Technology in the US) and Microsoft making its XNA game creation tools available to all, student game makers are suddenly the rage.

Nintendo machines are traditionally hard for established companies to get a foothold on, let alone students. So it's cheering to report that one team at the recent Dare to be Digital competition held at University of Abertay Dundee in Scotland is aming high and gunning for the DS.

Indeed, the team, Artisan, has already won a prize at Dare to be Digital, thanks to its DS prototype displaying 'the most market potential'. 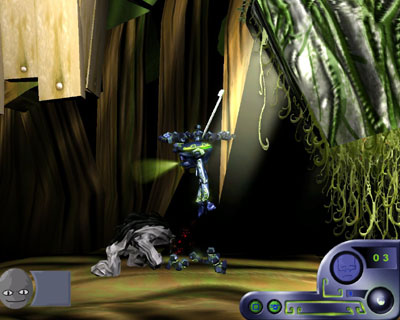 Metalheads: made by students

According to team leader Tommy Millar, the DS was chosen as the target platform because Artisan felt it offered a much more intimate and direct gaming experience than any other platform.

"Our control method coupled with the game's nostalgic gameplay could only be achieved on the Nintendo DS system," Millar explains.

As for the game, Metalheads, Millar describes it as "almost a merging of Pikmin, Lemmings, Abe's Oddysee and Flashback."

To play, you take control of main character, Meta, a sort of two-legged mecha, using the D-pad. And helping you make your way through the obstacle strewn and nasty ridden platform levels are the eponymous metalheads.

Tiny little blocks of metal with legs, the metalheads are at the heart of the gameplay, since you can organise them into various useful objects using gestures drawn on the touchscreen.

Well, sort of. Since the team couldn't actually get hold of a DS development kit, Metalheads was made on a PC using a Wacom tablet in place of a touchscreen. But we've played the game, and it all seemed to work fine. 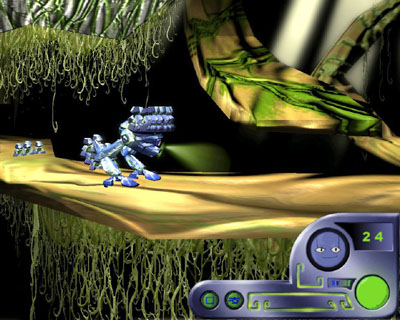 A Wacom tablet stands in for the DS touchscreen

Drawing a rectangle, for instance, gets your metalheads to create a box that you can then use to climb over barriers like stepping stones.

Another option (if you have enough metalheads) is to draw a horizontal line, so that they form a rotor on Meta's head. You then frantically scribble to gain altitude, just like a helicopter.

And Artisan certainly has lots of other ideas.

"The formations are so abundant that executing them all for our prototype was unrealistic," Millar explains. "We did design 18 formations though, ranging from defensive walls to wheels where you have to draw in a circular motion to gain speed. They'll all be integral features in the game, although they're not in place just yet."

What's more, as Meta you can't be hurt, only delayed, so it's the time you take to complete the level and the number of metalheads you collect on the way that provide the barometers of success. There's no 'You Died' screen here, in other words, but plenty of opportunity to beat your best score. 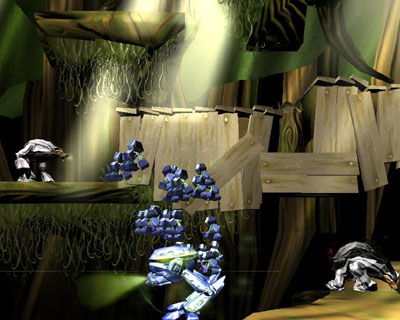 Here we see the metalheads climbing onto, erm, Meta's head

As for the future, Millar says he's gathering information regarding development kits for DS and trying to interest companies in making Metalheads a commercial product.

"A lot of the information I require is hidden away," he admits.

And he'll have other issues to deal with. At the moment, the game is too graphically rich for DS, so the art assets will have to be simplified – some 3D models will become sprites and various textures reduced in detail. The user interface will also have to be redesigned to operate on the DS's screens.

Beyond that, Artisan already has plenty of ideas about where it can go with Metalheads; a Wii version of the game is a twinkle in Millar's eye. "Graphically, the game is in between DS and Wii at this current time," he says.

DS-Wii connectivity has also been looked into. "We've planned Final Fantasy Crystal Chronicles-style continuous simultaneous play, as well as content that can be transferred between consoles, such as completing a section on your DS to unlock a new free downloadable client level on your Wii," Millar enthuses.

Go on, somebody give him a development kit.

Get all the latest DS news and reviews in our dedicated DS section.

New DS and PSP games on sale from Friday

Talismoon's PSP car cradle for safe play on the freeway