App Store Analysis: Madden and EA power to the top of Paid and Grossing charts

It's a perfect play

It's been a fairly confused week on the US App Store - what with the general re-organisation of the chart sub-categories and user interface tweaks thanks to iTunes 9 being released - and not to mention the appearance of the Top Grossing chart, and the listing of the Top 200.

(And no, we're not going to double our workload and start analysing that too!)

Combined with the start of the American football season and the debut of the world's best selling American football game onto the App Store, and it's no surprise that despite being the only game priced at $9.99 - EA Mobile's Madden NFL 10 is straight in at #1 on the US Top 100 (both Top Paid and Top Grossing).

Of course, the change is even more pronounced in terms of the average price of the top 10, which is up a massive 52 percent thanks to Madden.

Indeed, the squeeze has hit the mid-sized publishers with even previously solid performers such as PopCap Games, Digital Chocolate and Chillingo losing ground in terms of the number of titles they have in the Top 100.

Battle Bears and Mr AahH!! shoot up the chart

As a category, 99c games continue to be strong performers. Examples which have climbed the chart to enter the top 10 include 3D shooter Battle Bears, which is up 35 places to #2, and platformer Mr AahH!!, up 36 places to #3.

Also proving that brands have their place, Disney's mini-game collection Toy Story Mania ($4.99) is a new entry at #46.

Average price is up, but still historically low

The average price of the top 10 at $3.49 is the highest it's been during the three months of our App Store Analysis. 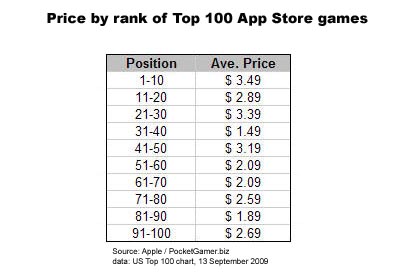 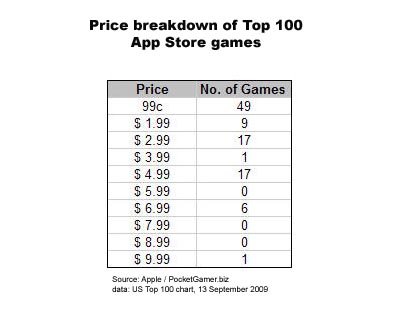 And as noted last week, Firemint has extended its 'weekend' sale on Real Racing, which saw the now $6.99 game rise another 10 places to #54.

EA Mobile and Gameloft get profitable

EA Mobile and Gameloft maintain their position as the dominant players on the App Store, although EA dropped by one to 14 games in the Top 100 as Snood dropped out.

What's really significant however is how the publishers have increased the average price of their games. 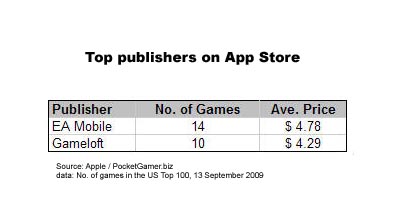 As the only companies who have maintained a strong, longterm position on pricing, they are slowly leveraging their advantages in terms of scale, access to licences, experienced development staff, and number of releases, to start making the App Store a profitable place to do business.

In a minor example, this week, EA raised the prices of games such as Trivial Pursuit, Yahtzee Adventures and Clue following previous sales.

In contrast, this is the first week of our App Store Analysis that there are no other publishers with more the three games in the Top 100.

PopCap Games is down to two, as is Chillingo which lost Inkvaders and Minigore.

Digital Chocolate is down to one game. Glu and Gamevil both have two games in the Top 100, as do developers Firement, Skyworks, and Backflip Studios.

Opinion: Apple has to stop with the censoring, double standards, and crippling of art in the App Store