Enemy AI is the bane of many stealth games, as it's deceptively difficult to render in code how a guard will react to the sound of a shotgun blast on an otherwise quiet evening.

APB Retribution - a gritty top-down cyberpunk shooter - struggles valiantly against inconsistent enemy AI right out of the gate and, unfortunately, it never finds an effective way to sneak or shoot its way past it.

You're a shotgun - bang!

At its heart, APB Retribution tries to recall the darker elements of Shadowrun, Fallout, or - for tabletop enthusiasts - Necromunda with its small-scale presentation of gangland skirmishes.

When the story kicks off, you take control of a generic gang member who recently got over a bullet to the head and is out for some revenge against the faction that tried to kill him.

Movement is handled by a simple tap and drag interface, and combat follows a simple tap-to-kill trajectory - it's a breeze on an iPad, but it might feel cramped on an iPhone's more modest screen.

Despite the simple story and intuitive controls, however, there's plenty of warning signs that the scope of APB Retribution was a bit too ambitious to pull off.

For starters, weapons - which you pick up from fallen enemies - don't have any quantifiable difference in performance past 'ranged' and 'melee'. That is to say, your fists will do as much damage to an enemy guard as a shotgun blast at close range will - and pistols are evenly matched with machetes.

The only real difference with weapons is that a wandering enemy might hear the shotgun blast and come running, while your fists are decidedly quieter.

Also, they don't run out of ammo - because, y'know, they're fists - and so there's really no incentive to anything but your knuckles in APB Retribution.

What's up with that thang?

Unfortunately, this niggle is just the beginning of what's wrong with the game.

The enemy AI switches unpredictably between oblivious and prescient, with some guards not noticing a friend being lifted by a shotgun blast three feet in front of them while other (perhaps supernaturally gifted) guards can pinpoint your position behind a wall and gun you down accordingly.

Lest you think I'm being unkind to APB Retribution, here's a screenshot to prove just how wonky the AI is: 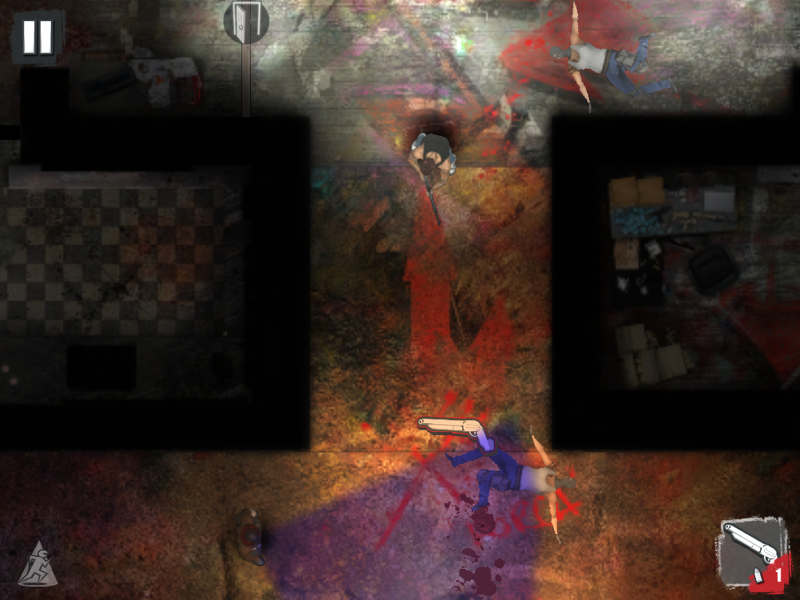 What you're seeing there is one guard, recently shotgunned, directly in front of another guard's field of vision. The blue colour of the cone means the living guard hasn't been alerted to my character's presence despite seeing and hearing his friend's messy demise five feet in front of him.

There are times when APB Retribution tries to explain this obliviousness away, like when it allows you to distract enemies by throwing pornographic magazines at their feet, but even this is executed unrealistically as it effectively makes the enemies incapable of noticing anything.

I've been distracted by pornographic content before, but I like to think I'd notice the sound of a shotgun in the next room and tear myself away.

Ultimately, APB Retribution's flaky AI and steep difficulty curve make it a hard game to recommend to any but the most ardent of top-down shooter/stealth fans.

Its plot is nowhere near strong enough to compensate for the anaemic stealth mechanics, and the inconsistency of enemy reactions creates an unpredictable level of difficulty that will frustrate newcomers and diehards alike.

There's hope that a future update will address these problems, but at current APB Retribution is a game you should tiptoe past on your way to better fare on the App Store.

Like a bowl of volatile oatmeal, APB Retribution manages to be unpredictable and bland at the same time
Next Up :
Star Discord review - "Needs polish, but it's shaping up to be a true RTS on the go"

Check out the fluid and bloody urban battles in APB Retribution