By now you know that Rovio games can be a little hit or miss. It all depends on the direction it's decided to take with its latest Angry Birds game.

Angry Birds Evolution is no exception, but thankfully it's one of the better titles in the series and is surprisingly fun - a little like the original used to be.

But even with its well balanced layout and design and addictive gameplay, it can't escape the free to play problems that always comes a'knocking eventually.

Angry Birds Evolution is a slingshot tactical combat game that sees you equipping an army of rather perturbed birds and trying to defeat the green piggies that are swarming across your land.

In order to drive the oinkers from Bird Island for good you need to enlist a team of well-battled birds, each member of which can be found in a different area of the map. 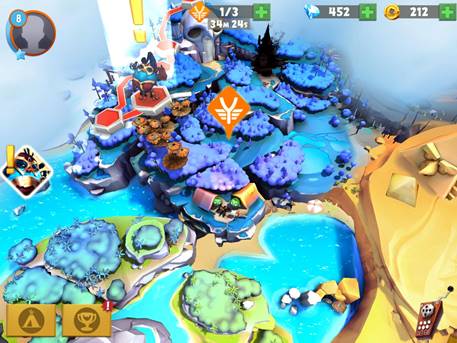 To get to these areas you'll battle your way across various tiles and face different enemies - inevitably these scraps get more difficult as the game progresses. From each successful battle you'll reap coins, gems, and more.

The core gameplay element in ABE is your ability to level up your bird team members - at a price. You can earn different birds the eggs enemies drop in battle or you can unlock them in the Hatchery.

Any doubles you end up with can either be sold off or you can merge them into one of your bird bodies like a feathery version of Cell from Dragon Ball Z.

Aside from the bog-standard battles there are also arena matches to take part in. Here you go head-to-head against another player in asynchronous gameplay. The aim here is to keep the piggies out of your side of the court.

You can also buddy up during certain battles by borrowing a feathered companion from another player, though I'm still not entirely sure what the point in this aspect is aside from promoting in-game friendship.

As you continue in the game Scouting Missions unlock and you can use your Scout Team to investigate certain areas. These will usually spit out some kind of coinage/reward before offering up a couple of extra battles.

This is where things start falling into the old free to play rhythms, however.

I dare say I was actually enjoying the game until my coinage ran out, my gems ran out, and my Scouts had run out for the fifth or sixth time.

Since you've only got three Scouts to work with, it takes just under an hour for a single Scout to become available again. So, three hours for the full set. 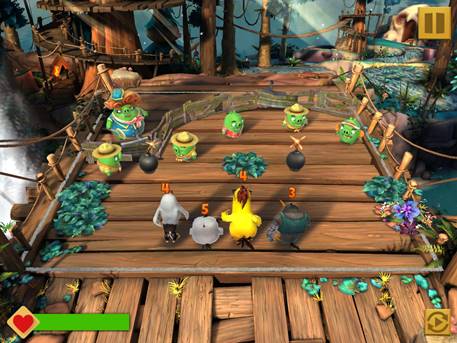 Angry Birds Evolution manages to coax you in for the first few levels and makes you think you're doing pretty well. Then it become evident you need to upgrade your birds more and more.

Each upgrade costs 40 coins, so you need a ton of them to get anywhere, but you only gain coins through winning battles or spending cash.

Of course, you can't win them if you're not at a high enough level to do so, and you can only use Scout locations a few times a day or fork out more money to bring them about quicker.

Angry Birds Evolution is better than you think it's going to be. With a decent design, over 300 birds and enemies to unlock and collect, and a decent focus on community.

But when the grind kicks in, and you're stuck at a level that's not high enough to progress, some of that early shine starts to disappear.

It's a real shame as the gameplay itself is rather fun. Its slingshot mechanic works extremely well in an isometric view, and you feel very satisfied when you win battle after battle.

But, hitting blockade after blockade as you try to move unlock more of the game is likely to leave you with a slightly bitter taste in your mouth.

Angry Birds Evolution is a decent game at first before the usual free to play problems comes knocking
Next Up :
DC Worlds Collide review - "DC fan service in an enjoyable gacha package"