What do you do once you've taken over the world? That's not a question most of us will ever have to answer, but it was the one facing Rovio after the phenomenal success of Angry Birds.

The hallmarks of the Angry Birds success are still here: the game is a physics-based puzzler with a cute sense of humour and a recognisable central character; and the game features bite-sized levels that you can pick up and play whenever you have a spare couple of minutes.

In a way, then, Amazing Alex is the safe option for the Finnish studio. It's not an original idea (see Casey's Contraptions or The Incredible Machine for proof), it's not too far removed from the money spinner that came before it, and it's not breaking any new ground.

It is, however, rather a lot of fun.

Create instead of destroy

In Amazing Alex, you play as the eponymous youngster, a spiky-haired, hoody-wearing genius who likes nothing better than to use the junk he's accumulated over the years to set himself challenges. It's your job to build the contraptions and establish the routes that enable Alex to reach his goals.

Things start off relatively simple. You have a few planks, and you need to guide a ball into a washing basket. You drag the item you want to use from the toolbox at the bottom of the screen, place it, then tap on it to change its angle.

As you progress through the game, you'll have to knock over structures; guide balloons either to safety or the pointy end of some scissors; rescue dolls that evil piggy banks are holding hostage; and drive radio-controlled cars into each other.

Your arsenal of tools expands as your goals change. Whereas to start with, you have planks and balls, by the later levels you'll be threading together pipes, springs, scales, pulleys, trapdoors, and a whole lot more.

Each level has three stars placed around it. These are easy to grab to at the very beginning, but soon you'll need to think deeply about a solution that leads to your grabbing the stars and completing the objective of the level. Getting three stars on some of the later levels is a real challenge - you are forced to seriously think about the tools at your disposal.

Obviously, the style of the game leaves a lot more scope for experimentation than Angry Birds does, but it also means it's a lot easier to get flummoxed by. While you are given a set number of items to solve each puzzle, there are still hundreds of combinations you can throw together, with no definitive right answer.

It makes for a more contemplative style of play than you'd experience playing Angry Birds, but at the same time the game doesn't quite motivate or urge you enough to push onto the next screen, onto the next problem to solve.

That's not to say that Amazing Alex isn't an addictive experience - it's just that compared to Angry Birds, there's less excitement involved. You rarely feel like throwing your arms in the air when you've completed a puzzle, for example, and the absence of any kind of antagonist reduces the stakes slightly.

The inclusion of a level editor is nice, though, even if it's made clear from the outset that anything you make belongs solely to Rovio, who can take it and change it as it sees fit. It does, however, mean you can challenge your friends far more directly than you can in Angry Birds.

What do you do once you've taken over the world? Well, if Amazing Alex is anything to go by, you consolidate your position. It's not a classic, and it's unlikely it'll capture the public imagination in the same way that its bird-tossing stablemate did, but it's a solid slice of portable puzzling all the same. 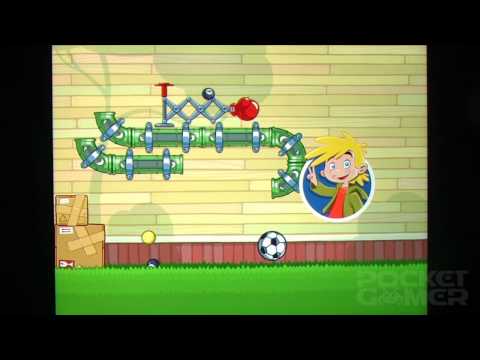 While it was always going to get squashed under the weight of post-Angry Birds expectation, Amazing Alex does a decent job. It might not be Rovio's finest work, but it shows there's life in the company outside of pigs and disgruntled birds
Next Up :
Netflix Oxenfree review - "Reading the signals of a thriller story"

Level of the day: Ball rules

Level of the day: Disco stars