From the get-go it's obvious that AxE: Alliance vs Empire doesn't really care if you play it or not. Don't get me wrong, it wants you to download, install, and enjoy the game, but when it comes to pushing buttons it doesn't give a flip one way or another. Push 'em if you want, let the game take care of it if you don't.

And the fact of the matter is you probably will let the game get on with it. There's a lot of running around to do otherwise, and while the game looks pretty nice, staring at a generic fantasy world while you sprint through it from A to B isn't the most exciting way to spend your time.

Instead you're going to concentrate on the meta, adding to your equipment, picking the quests you want to go on, and ignoring the story as best you can. AxE is, to all intents and purposes, an incredibly evolved clicker. Albeit one where clicking is an option you don't have to choose.

Play me for it

After that introduction there's a very good chance you've already decided whether you're into AxE or not. You're almost certainly right as well. This isn't a game that's going to sway you from your path of either loving or hating this sort of hands-off MMO experience.

There's a familiarity here that anyone who's ever played any MMO game is going to feel instantly. Run about picking up fetch quests, smash up big monsters from time to time, and head into dungeons if you're looking for more of a challenge. There are guilds to join, sub-quests to complete, and daily challenges begging for your attention.

Every action you make adds to your stats in one way or another. Right now, as I type this, I'm mining for gold along the coast. My character, Bribriaxes, has just unlocked a new skill that allows him to throw a giant rock on his assailants. He seems pretty pleased with it, when I look in on him from time to time. 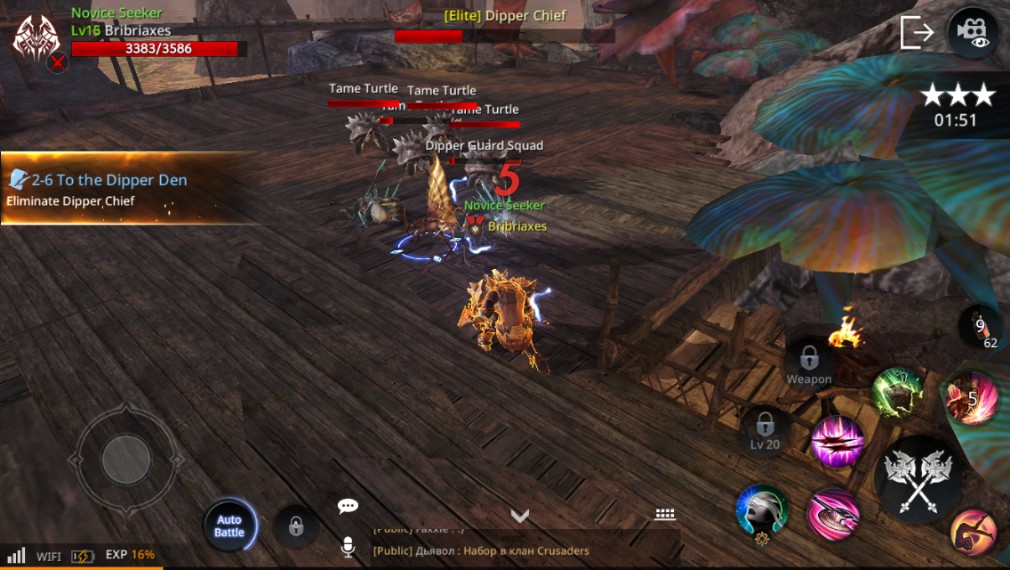 There are different kinds of characters to play with. You can pick from the Alliance or the Empire, which restricts the roles you can choose. Bri is a tank, but you can be an archer, a warrior, a mage, and more. I'd say that picking the one that best represents your playstyle would be a good idea, but in the end it's more of an aesthetic choice than anything else.

Unless of course you're going to be pushing the buttons, in which case picking the right character is going to define your experience. That said, when the temptation to let the AI take the reigns is this high, it's not going to make too much of a difference.

Your main role in the game is to mess about with your gear to make sure you're as strong as possible. There are always new rewards to collect, new bits of the world to explore, and ever-more side quests and diversions that you can set your character off doing with little to no fuss.

Even if AxE isn't for you, it's hard to complain about what it offers. It's super polished, stacked to the rafters with content, and flows along with exactly the sort of pace that's going to suck you into the maelstrom of fun if you let it.

In the end, AxE offers up a super slick midcore experience that's going to capture the imagination of a lot of people. Sure, it might not be for you, but that's okay - there are loads of other games you can go and play instead.

AxE: Alliance vs Empire doesn't do much wrong, and if you like your MMOs hands-off, you're going to love it
Next Up :
Turtle Beach Recon Cloud review - “A great controller, but maybe not best-suited for mobile”