Crazy Taxi is not much like being a cabby in San Francisco, and driving like you do in OutRun would get you arrested. Virtua Cop, on other hand, is only a halfway accurate representation of proper police conduct.

So it's not surprising that After Burner Climax is probably not the most realistic take on jet fighters. You probably can't barrel-roll a Boeing F/A-18E/F Super Hornet by snapping an analogue stick from side to side, and I don't think they come with infinite missiles, either.

But that's all part of the joy. You simply manoeuvre that jet about the screen to target baddies, then let loose a salvo of laser-guided rockets to blow them out of the sky.

You can fire a machine gun to tackle nearby foes and do giant barrel rolls to evade incoming fire, but that's about the extent of the game's mechanics. It most often feels like a slapdash - and slightly brainless - effort to paint the screen in target reticules, before hammering away at the 'missile' button.

It's a long way from AM2's other arcade revival, OutRun 2. That was about pinpoint manoeuvres and precision swerves and mastery of the controls. No, After Burner Climax is not like that at all. You'd be hard pressed to describe it as a sophisticated game.

It's more about the sheer visceral thrill of firing a bazillion rockets into a fleet of fighter planes, helicopters, and jump jets, while rocking out to cheesy arcade tunes and staring out at backdrops that look like the real world as if seen through about 12 Photoshop filters.

I feel the need… the need for speed

And, I admit, it's fun. Plus, the special missions are always a treat. On certain levels, a VIP vehicle will swoop into view, and desperately try to evade your fire.

Each requires a new approach if you want to take it down. A zippy prototype jet might require you to break the speed barrier just to keep up, and a stealth jet could throw off your missile targeting system. Gun down the lot and you'll get a secret side mission.

But, it's not a long-lasting excitement. You can blitz through the main game in about 20 minutes, and then you can unlock extra options if you feel like tweaking the firing rate or combo system, or you can play score attack and try to climb the leaderboards.

When After Burner Climax first took off, seven years ago, it was played on an enormous arcade rig, with a servo-powered tilting chair you physically strapped yourself into. Needless to say, it lost something in the translation to Xbox Live.

And on your iOS device, it's even less impressive. It's almost impossible to comprehend what's going on in five inches, and the bumper display of the iPad really shows up the game's imperfections.

You get to see the technical compromises made to squeeze the game onto the App Store. Not just the low-resolution textures and jagged edges, but the dodgy special effects that deny you that mind-blowing thrill of darting through the sky.

Which is a shame, because that was always the crux of After Burner Climax. Strip away the feeling of flying dangerously close to a mountain at Mach speed and you're left with a startlingly basic game that doesn't really stand up to repeated play. 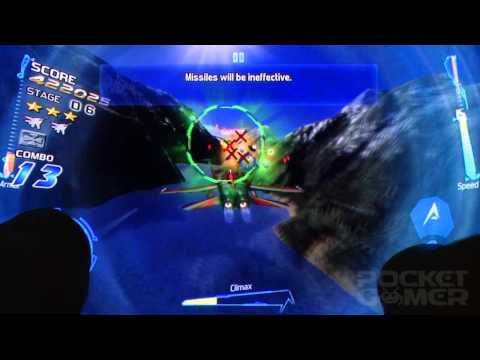 After Burner Climax is appropriately named. It's an excitement that just doesn't last long
Next Up :
Jade Order review - "An puzzling path of the warrior"