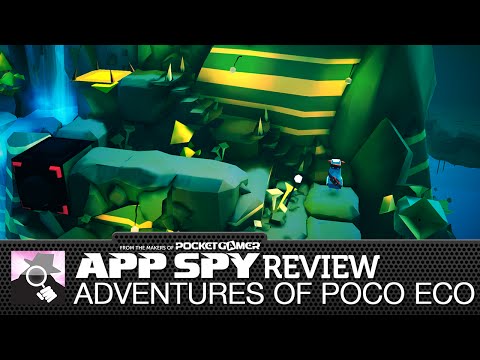 Adventures of Poco Eco - Lost Sounds is a gorgeous mix of sounds and sights that, while it doesn't pose much of a challenge, is still worth checking out.

Set across a series of beautiful levels, and held together by an organic soundtrack changed by your actions, it's a relaxing adventure that deserves to be experience.

And while there are a few niggles here and there, it's not enough to spoil one of the most intriguing App Store releases this year.

You control everything with taps, poking about on the levels to move your little tape-wielding character around. You're aided at all times by a red, Navi-style sprite that points you in the right direction.

Levels mainly play out like little puzzles. There are buttons to push that rearrange the scenery, and amps to find that unlock even more buttons.

It's all delightfully sedate, and there's a chilled out vibe that permeates everything. Some might find the hand-holding a little too tight, but in a way that's the whole point: you're here to see and do rather than fathom.

This is definitely one to play with your headphones on as well. The music really makes the game, and without it you're missing out on a sizeable chunk of what's going on in Poco Eco.

The game fits neatly in with Monument Valley in that strange App Store sub genre of games that are ethereal, utterly enthralling, and don't really give you all that much to do.

That's absolutely not a slur though. The couple of hours you'll spend buried in Poco Eco are time very well spent, and getting to the end will raise a hefty smile.

Adventures of Poco Eco - Lost Sounds is mobile gaming done right. Simple, enthralling, and with charm to spare. You owe it to yourself to go and download it right this instant.

A wonderfully put together mobile advenutre, Poco Eco is well worth your attention
Next Up :
Hindsight review - "Deeply emotional but a tad repetitive"

Relaxing, beautiful musical journey The Adventures of Poco Eco is now on Android