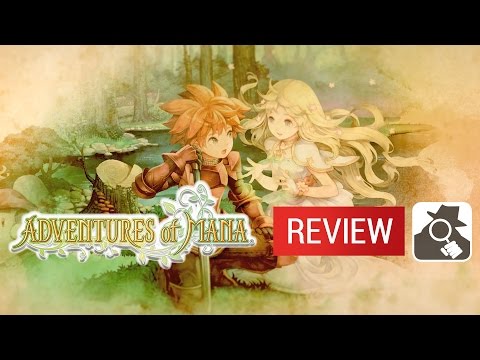 Subscribe to Pocket Gamer on
Adventures of Mana has a convoluted history. I could tell you it here, but it'd probably take up the full review and then I'd get shouted at for not telling you what the buttons do.

It's enough to say that this is a polished version of one of Square Enix's classic RPGs. It eschews the standard turn-based battles in favour of a more Zelda-like approach, with top down, fast based-sword combat.

And it's pretty good. The new lick of paint is impressive, and the music in particular is excellent. There are a few niggles, as you'd expect with a game with a core as ancient as this one, but it's still a lot of fun.

What do you do then?

You run around and hit things with a sword. It's a bit more complicated than that, but that's the gist of it. You've got a floating stick and a couple of buttons at your disposal, and a pretty big world to run around.

That world is full of a variety of different monsters, who pop into being when you walk into a new area of the screen. It can be a bit jarring at first, but once you figure out not to move before they arrive, you'll be okay.

You mash buttons to kill the creatures, interact with NPCs, and open chests. There are keys to collect, quests to complete, and a variety of characters to hang out with. And by 'hang out with' I mean 'kill monsters with.'

As you murder things you'll level up. You can spend points in one of four different disciplines – Warrior, Monk, Mage, or Sage.

The different classes give you different attributes. You can choose to specialise, or try and make a rounded character by selecting from different paths at different times.

It adds a reasonable amount of depth to proceedings, and helps deflect from the slightly grindy, repetitive nature of the sword-hacking combat.

Worth picking up then?

It's a tough one. Adventures of Mana is an expensive game, make no bones about it. If you're into the series, or Square's output as a whole, then it's probably a bit of a no-brainer.

If you're looking for a dungeon crawling RPG though, there are better, cheaper options out there. Oceanhorn, for one, offers a tighter, more interesting experience.

That's not to say there isn't nostalgic fun to be had here, but it might be worth waiting for the game to come down in price before you commit to it completely.

Adventures of Mana is an entertaining blast from the past, but it's high price point might put off those with a casual interest
Next Up :
Netflix Oxenfree review - "Reading the signals of a thriller story"

Square Enix's Adventures of Mana drops out of nowhere on PSVita, out now in Europe

Square Enix's Adventures of Mana, Mystic Quest's remake for mobile is on sale for the first time