Gameloft’s latest ‘homage’ is not, as outward appearances would suggest, to Grand Theft Auto: San Andreas.

Instead, it’s more like a straight-to-DVD sequel to Max Payne, a third-person shooter with a grizzled anti-hero who prefers the patented diving-in-slow-motion technique to take down bad guys.

Hero John Kannon is the kind of cop who’s prepared to bend the rules to get results – you could call him a ‘loose Kannon’ had Gameloft not already got there with the first mission’s title, during which he descends from a skylight on a group of gangsters, yelling, “it’s raining bacon, motherfuckers.” Gritty vacant

As amusing as that line undoubtedly is, Gameloft’s game lacks the self-awareness to feel like a true parody. If it is a satire on gangster games and films then it’s an exceptional one, but the clichés are presented with such a straight face that you’re always laughing at it rather than with it.

When you’re not sniggering at Kannon’s gravel-throated posturing in the overly frequent cut-scenes, you spend much of your time gunning down drug dealers and other ne’er-do-wells. You guide Kannon via an onscreen thumbstick, aiming his crosshair with your right hand.

You can also use the internal gyroscope to control the camera, but unless you want the action to look like it’s been directed by a blindfolded Paul Greengrass then it’s best to turn that off immediately. Duck hunt

There’s no cover system to speak of, though Kannon is able to crouch behind scenery to regenerate health. That said, most missions put you in an open room with enemies attacking from all sides, so your best bet is to make judicious use of Kannon’s time-manipulation abilities.

Swipe the stopwatch icon on the right of the screen and Kannon will dive slowly in the direction you chose, continuing to train his sights on his aggressors. This gives you a little more time to line-up the headshots that take those tattooed perps down quicker.

Naturally, its use is limited, so you’ll need to wait until it’s refilled before trying again - assuming you get the opportunity, that is. 9mm’s bizarre difficulty curve has a few sharp spikes, with enemies unerringly accurate at times, and completely unable to hit you at others. Bauer beware

Between shootouts you’ll get the opportunity to indulge in some forceful interrogations, which generally require you to tap onscreen icons to thump some sense into witnesses or to jab highlighted words which force your victim to confess all.

As well as the substantial single-player campaign there’s a competitive multiplayer mode that supports up to 12 players. Yet as technically impressive as this achievement is, unfortunately it doesn’t compensate for the mechanical shortcomings.

There’s something laudable about Gameloft’s attempt to create a console-style experience on a smartphone, but sadly 9mm only serves to highlight the limitations of the format. With so many quality iOS titles of late, that hefty 720MB of space should be saved for better games. 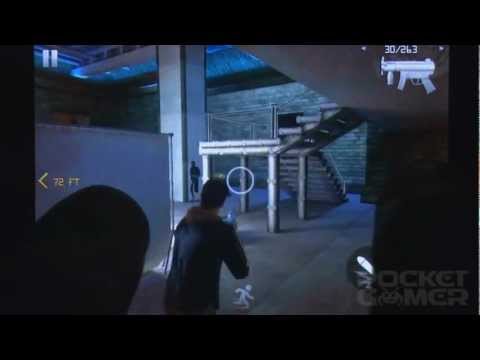 A technically ambitious but unintentionally hilarious shooter that's far too flawed to recommend
Next Up :
Backbone One review – “Turn your iPhone into a games console”