What can you do with an auto-running platformer that hasn't done before? Well if you're 3eality, you make players play three different versions of the game at the same time. Yeah, you read that right - three games, one screen.

It's not as confusing at it might sound, and it certainly opens up the possibility of some really interesting mechanics. However, there are some little niggles here that keep the game from reaching the upper echelons of the mobile gaming hierarchy.

And that's a shame, because it's hard not to like 3eality and what it throws into the mix. It's just that sometimes, when that mix has had all of the ingredients taken out of it, things can get a bit too simple.

Where in the top part of the screen the way ahead might be clear, you'll be picking up lightning bolt collectibles in the middle, and trying to jump over a bottomless pit in the third. It's hectic, but there are some interesting systems here designed to make sure it doesn't get overwhelming.

For one thing, exclamation marks flash up on the different chunks of the screen when something bad is about to hit you - if you're quick enough you've got time to react, but you'll need to make sure your eyes are open and your fingers are at the ready, otherwise it's going to end badly. 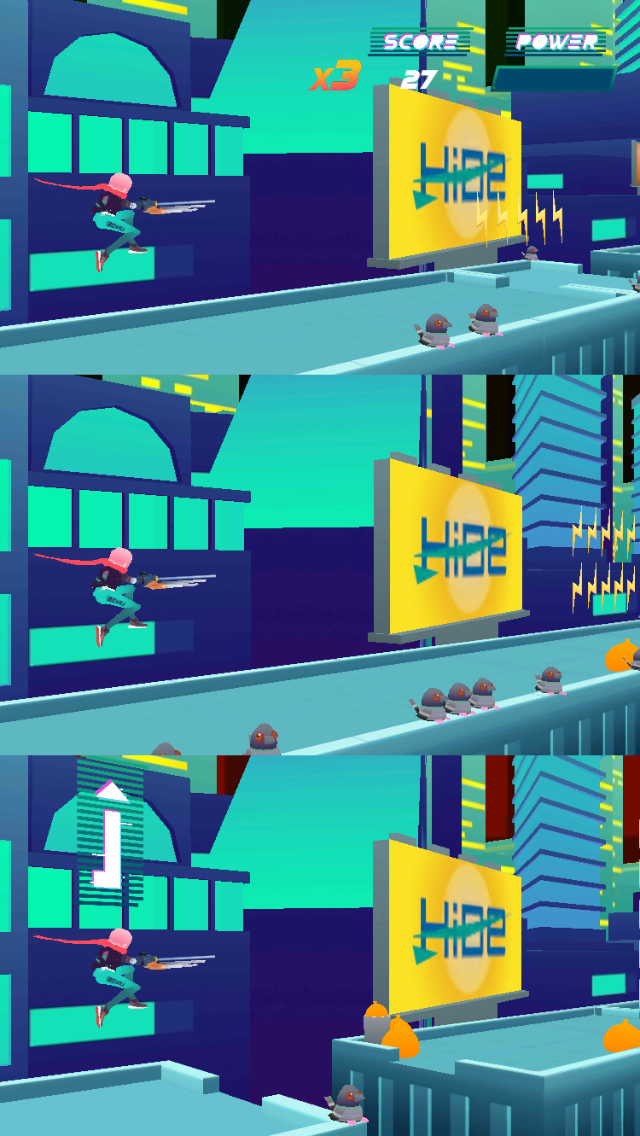 The problems start creeping in when you start losing lives. When there are three different chunks of the screen to keep an eye on, you're going to be having stressful fun, and even when you're down to two there's still a frisson of excitement because you're doing something a bit different.

It's when you've lost your those two lives that things start to drag. While keeping things simple when there are three different levels to keep an eye on is a great idea, when you're only watching one the lack of control is going to leave you a bit bored.

It's a problem that's inherent in the design, of course, but it doesn't make it any more disappointing when the exciting runner you were playing slowly but surely becomes a much less interesting version of itself.

That's not to say that there isn't fun to be had here, especially for the first few runs when you're getting to grips with the quick-fire reactions that the game asks of you. But eventually you'll come to realise that 3eality is actually getting less exciting as you go.

It's still worth checking out, and it'll definitely be interesting to see if updates in the future fix the problem, but right now 3eality is just quite good. With a few tweaks here and there, it could end up being amazing though.

3eality is built around a decent central idea, but unfortunately it doesn't quite see it through
Next Up :
DC Worlds Collide review - "DC fan service in an enjoyable gacha package"